What is robotic surgery?

Robotic surgery (or robot-assisted surgery) involves the use of robotic systems to aid in surgical procedures. Some of its major benefits over traditional (open) and laparoscopic surgeries include:

For the patient, this translates to: 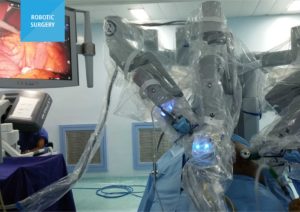 Can bariatric surgery be performed robotically?

More and more world- class centers all over the world are performing all types of bariatric surgeries by the robot-assisted technique.

This technique, unlike laparoscopic surgery, can be used in high-risk obese patients with difficult anatomy without compromising the surgical performance and outcomes. Robotic bariatrics is highly advantageous to give better results in the super obese patient (whose BMI > 50 kg/m2) as the robotic arms negate the abdominal torque effect. These arms actually lift the heavier than normal abdominal wall of the patient against gravity allowing more space for the surgeon to use his instruments inside the abdominal cavity, thus allowing faster surgery, less post operative pain, faster tissue healing and an ‘ early recovery’.

In addition, specifically for revision bariatric surgeries, and also for reversal procedures, robot – assisted technique is particularly advantageous. This is due to better vision of the altered anatomy, and greater precision in handling previously operated upon scarred tissues. This minimizes trauma to tissues, thus leading a safer surgery.